A high school student from Toyon High School, Ere, in the Ado-Odo Local Government Area of state of ogun and her mother reportedly hired thugs to mistreat her teachers, witnesses said.

In the commitment signed by the parents and guardians, they guaranteed that their pupils would “behave well and not participate in any act of violence/misdemeanor that could disrupt the proper functioning of the school in any way”.

Passport photographs of both the student and parents were attached to the duly signed forms.

In the last quarter of 2021, more than four teachers were allegedly beaten by their students and, in some cases, in collusion with bullies, a fact that sparked criticism.

how the problems started

Like other students, witnesses said the student and his father, whose names we withhold until we can learn their reactions, also signed the pledge.

PREMIUM TIMES inferred that the student had previously been prevented from entering the class due to his hairstyle.

The school had sent the student to get a haircut before returning to join his colleagues in the classroom.

But upon his return, the student, his mother and hired thugs reportedly pounced on three teachers, injuring them.

A school staff member who does not want to be identified due to civil service regulation told our reporter that “three teachers were beaten: Messrs. Abel Thomas, Kabir Azeez and Adegun Adekunle.”

READ ALSO:   Why we oppose the establishment of Nigeria Air - Local Airline Operators

“A car belonging to Mr. Jolayemi Jeromu was destroyed. One of the thugs was the one who broke the windshield of the car.”

When contacted the school’s deputy principal, Mariam Onilogbo, said: “On Monday, we asked our student to go and get a haircut because the hair he brought to school was not acceptable at school.

“Yesterday he came back with that same hair, we told him to go get a haircut. I picked up her bag and told her to come back after I cut her hair. Going back to school, he came with two men and two women to accuse us why should we ask him to cut his hair.

“Now I told them that if we can’t tell him to cut his hair, they all have to leave my office. I gave them her bag and told them to go and teach her at home.

“Last night, they came back to our rooms, claiming that we had stolen their phone. They almost attacked us. We told them that his phone is not with us. They came to find us again this morning, but thank God no one was attacked.”

Ms. Onilogbo said that the student’s mother and one of the thugs were arrested by the police.

Meanwhile, Abimbola Oyeyemi, a police spokeswoman in the state, confirmed the fact and added that the parents have been arrested.

“Police Commissioner CP Lanre Bankole has ordered that the escaped thugs who accompanied the couple to attack the school be hunted down and brought to justice. He also ordered that the arrested couple be charged in court without delay,” Oyeyemi said.

Let here it in the comment below if you do have an opinion on this; Nigerian Student Told To Cut His Hair Allegedly Hires Bullies To Assault Teachers 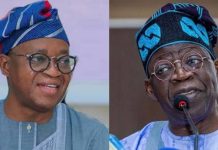 Tinubu congratulates Oyetola, says that it is the victory of light over darkness